Building a relationship with your dog is similar to making friends with a foreigner. At first, the language barrier may make communicating and understanding each other challenging at the very least. However, over time and by exerting effort, all parties can come to a point where everyone gets their point across. 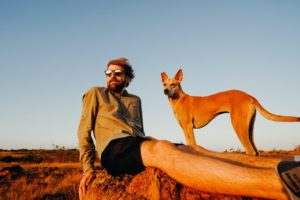 Dogs see and hear more of the world than humans do, but bridging the communication gap is mainly the responsibility of the pet owner. As a fur parent, you need to take steps to understand your dog’s language and speak it to communicate with your pooch. A reputable brand offering pet food delivery in Dubai shares some of the most common communication signals and what they mean.

Looking into a dog’s eyes

It is a common recommended practice among fur parents and breeders to never lock gazes with a canine, especially one you have never met before. Staring into a dog’s eyes without blinking signifies a challenge. The dog could become aggressive as a result.

Averting the eyes does the opposite. Dogs that do so imply that they are taking a submissive position.

During play, your pup’s eyelids may droop. Drooping indicates pleasure in some cases. Expect your puppy to squint or even let out a happy moan when you rub his ears.

Being naturally taller than your pets, at some point you may have intentionally or unintentionally looked down at them to talk or pat their heads. Looming over your pet has the same effect as staring it down. It symbolises dominance.

Such displays of dominance may not have as great an impact on older dogs who have accepted your status as the head of the pack. However, this type of behaviour may be upsetting or frightening for pups. Pups or timid dogs may exhibit signs of anxiety in the form of wetting.

Approach a non-friendly dog in this manner, and you may come across as a threat. Unfamiliar dogs may show aggression or appear to fight back. To avoid coming off as such, let the dog come to you instead.

Give the dog space and time to approach you. One way to make yourself appear less imposing when approaching a dog for the first time is to kneel or crouch down and have your side face the dog. Averting your eyes and not directly approaching the pooch in question are some ways to gain his trust.

Some of our pet food suppliers and customers we have talked to admitted to using the same technique when approaching a new dog. According to them, the non-direct approach not only presents them in a non-threatening way, but it also gives the canine time and space. Given these aspects, the dog may build up the courage to stay and approach you.

For humans, giving and getting a hug is a sweet gesture. It is a means to show love and affection towards another individual. Unfortunately, dogs may not see it in the same way.

Puppies grab onto their siblings when they play, wrestle or fight. In older dogs, the embrace is mainly used during mating or to show dominance, not affection. The same goes for kisses as well.

Your dog may perceive the behaviour as an attack, or a means to restrain its movement. A restrained dog may choose to lash out or become aggressive. Given this reaction, resist the temptation to hug or even kiss your dog.

Kids learn by example. They may have gotten used to getting hugs and kisses from their parents, other relatives, or friends, but they need to understand that doing it to a canine is a big no-no.

If you have kids, teach them alternative ways of showing affection to the family pet. Explaining and instilling what behaviours are acceptable when being around dogs is necessary to keep your kids safe. At the same time, it allows you and your entire family to learn more about this non-human member of the household.

Barking, howling, growling, whimpering – these are a few ways dogs use their vocal chords to communicate with their owners. Some dog breeds are descended from wolves, but even wolves don’t use barking as a means of communication. Experts theorise that domesticated dogs may have learned to bark or vocalise more to ‘talk’ to their fur parents.

Over time, barking has played a more significant role in dogs. Barking is used as a greeting or defense mechanism, or during play. Canines bark when there is somebody at the door, when it gets frightened by the sound of firecrackers, as a sign of boredom, or even when a strange sight amuses it.

Some breeds are more talkative than others. If you are sensitive to noise, you may want to look for breeds that are not as vocally expressive. There are also ways of reducing the amount of barking, but keep in mind that barking in dogs is similar to people talking – there is a limit to how much you can change.

Superstitious people see howling as a bad omen. Depending on when and where it happens, some individuals believe that it’s a premonition of death, or that the dog sees roaming spirits. The reasons are not linked to the supernatural.

Canines often howl when they feel lonely. It is a common reaction in pups separated from their moms for the first time or when dogs are left alone for long periods of time.

Much like in the case of barking, some breeds howl more than others. The Siberian Husky and Alaskan Malamute are examples that are notorious for howling. Historical records indicate this may be due to their traditional role of tracking and hunting prey.

Whimpers, whines, and yelps indicate submission or fear, or signify that a dog is in pain. In general, they are used to grab the owner’s attention or indicate status.

Knowing which of the three is true for a specific situation requires careful observation. For instance, making these sounds while keeping distance implies fear or submission. On the other hand, avoiding any physical touch or holding up a limb could indicate injury or pain.

A dog that snarls or growls is safer than one that does not. These sounds are a warning for people to stay away. When an unfamiliar pooch does this, it is best to back off and be on your way.

Dogs have a language that shows other animals and people how they feel. Take note of these critical signs to correctly identify what your dog is trying to tell you.

Farah Al-Khojai is the Managing Partner of Pet’s Delight. A passionate entrepreneur, Farah holds a Bsc in Government from the London School of Economics. She is always on the lookout for new opportunities to develop and grow the pet and equestrian retail and wholesale market in the UAE and beyond, and is proud to be at the helm of the first and the largest pet care provider in the market representing world-class brands including Orijen, Applaws, Hunter, Savic, Flamingo, Ruffwear and Rogz.

Why is it important to clean and disinfect your kid’s toys?

How to preserve wedding flowers