Jewelry has held meaning since the first humans began wearing it. Sometimes, a necklace, hair barrette, or tie pin will have significant meaning to the wearer, and other times, these pieces will be symbolic of something else. Crosses, the Star of David, Pentagrams, and even peace signs have served to identify belief systems. Rings have also been the subject of such symbolism throughout history. Here’s a brief run-down of the meaning behind the type of ring or the finger where they appear.

Wedding Rings on the Fourth Finger

I could have started with any finger, but I thought I would start here since this finger is often referred to as the “ring” finger. Wedding rings are placed on the fourth finger of the left hand, but does anyone know where the tradition started or why? The hand that rings are worn on has less significance than the finger. Some claim that the left ring finger has a vein connection straight to the heart. While that may or may not be true, the more likely answer is that rings for women were often symbolic of her commitment to a man and his ownership of her. While many see this placement as romantic, this tradition is anything but sweet. The woman’s ring was often flashy to show her commitment to the husband, who probably received a dowry or entered into a business deal with her father.

Read More: Why Is Melania Trump’s Wedding Ring So Famous?

This finger is most closely related to commitment and vows. In addition to the commitment before God or a chosen deity or government official, this finger may also demonstrate a commitment to purity or non-spousal partners. Promise rings and purity rings are also often worn on the fourth finger. Purity is often a Christian construct, but these rings may also signify the purity of other forms of religious practices. 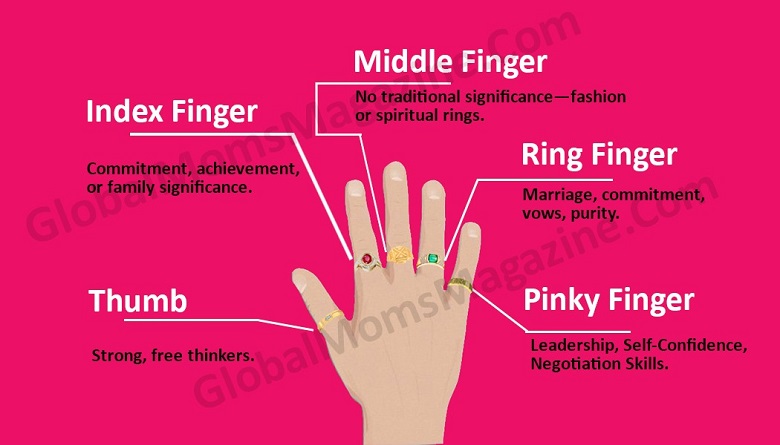 Since I started on this side of the hand, let’s move back to the little finger. It is also known as pinky finger. Pinky rings may have significance for some wearers, but others like the fashion. Most notably, males wearing pinky rings are associated with mobsters and gangsters. This is simply a stereotype, but many people believe that this is the case. In reality, this ring is often symbolic of leadership or negotiation. Glowsly.com notes that people who wear pinky rings are more self-confident or quick-witted. While this may not be the case for all pinky ring wearers, this is the perception.

Graduation rings are often found on this finger as graduates want to wear them after marriage. This is not always done but can be the case for some wearers. Initially, men wore rings on the left-pinky to symbolize their commitment in marriage and unavailability. This practice is almost unheard of today.

As I move on from that finger, I reach the middle finger. This finger takes on significant meaning in some parts of the world, such as the US. However, other parts of the world do not have the negative association with this finger. Rings on this finger, conversely, do not have the same negative connotation. Rings on this finger are the least common. If a ring wearer uses the fourth finger or index finger for ring wearing, the middle finger often makes it uncomfortable. The rings get caught on one another and make movement more restrictive.

Some people do like wearing rings on this finger and do not notice the restriction. Most traditions do not include middle finger ring wearing. On the other hand (pun-intended), many people on spiritual journeys will use this finger to wear rings symbolizing their experience.

The index finger is sometimes called the pointer finger. Whatever you call this finger, it can hold strong significance for many wearers. Like rings worn on the fourth finger for brides and grooms today, or ring fingers for men before the 20th century, Jewish women often wear the wedding ring on this finger. Today, this is often done before the ceremony, but the ring is moved afterward.

The thumb is the only finger left. This finger is also uncommon for ring-wearing. Strength is often the perception when rings are found on the thumb. People who wear rings on this finger are often strong and free thinkers. They do not seek others for support or clarity. They are also more influential.

Does Hand Really Not Matter?

For most things, the hand is irrelevant. The left hand tends to be where wedding and commitment jewelry is worn, but it is not mandatory. The hand one wears their rings on is essentially preference. Some people tend to wear larger jewelry on their dominant hand in case they need protection. It’s heavier and more useful in an altercation. However, since most people do not consider this necessary, it’s a less likely reason.

Men and women can wear rings wherever they are most comfortable. Some traditions are steeped in symbolism, while others are merely “the way things have been done for so long.” You do not have to conform to traditions if they make you uncomfortable. You can, and should, do what makes you happy.

This is a reference link to know the name of five fingers.

How You Can Dress Stylishly for a Picnic?

Which Dessert Shares Its Name with a Korean Food Made with Intestines?