You know the one story where you go to bed with a great three-bedroom house for your small family of 3, plenty of room for all your stuff and an overall wonderful family life–but then you wake up the next morning… You have five kids including four newborns? Your home is way too small. Your vehicle is too small and your expenses are through the roof. Yeah, this could be the beginning of THAT story.

My husband Justin and I have an amazing 4 year old daughter named Isla. We really wanted her to have a sibling to play with and grow up with, but we also didn’t want to start all over with the sleepless nights, the constant worrying and the ever growing expenses that come with having a newborn.

After much deliberation, we decided to have just one more and be done.

At our 8 week check up appointment we were in for quite the shock. Justin didn’t come with me to the appointment because he wasn’t feeling well. So I was there by myself. He sure picked one heck of a day to get sick.

The doctor started doing the ultrasound and had a weird look on his face. I asked what was wrong and he just kept staring at the screen. He asked if I was taking IVF… No!  absolutely not. Again, a concerning look on his face as he said “Well, I’ve never seen this before.” Finally, he told me there wasn’t just 1 baby…. but 4 babies!

Seeing my look of confusion, he repeated that there were 4 babies. After a few minutes of complete shock, I finally asked if this was some kind of joke or mistake. This couldn’t possibly be right! I’m only 8 weeks along and it’s not possible to have 4 babies at once? I wasn’t on any IVF! There aren’t even any multiples in our family! It seemed implausible.

After looking a few more minutes at the ultrasound, they confirmed that I was indeed, carrying quadruplets.

I couldn’t believe it. All of our plans were out the window now. We didn’t have 4 car seats or anywhere big enough to live. We don’t even have a car big enough to get them all home from the hospital! I started crying hysterically. The doctor told me I should call my husband, so I did.

Of course, at first he thought I was calling to say that the ultrasound went great and we have a strong heartbeat. When he found out that wasn’t the case, He laid out on the floor in silence. My daughter, Isla, who could obviously hear me crying hysterically on the phone asked what was wrong. My husband explained to her that we will be having 4 babies instead of just one. Isla paused for a moment and said… “Do we even have a plan for 4 babies?’

No! We definitely do not!

The next few weeks were a blur of ultrasounds, doctor’s appointments, and trying to come up with names for all 4 babies. That’s 8 names you have to come up with if you include middle names. We were having a hard enough time when we thought there was only one baby!

It was exciting and scary at the same time. We remember back when having 1 baby was difficult enough! We were totally the couple that would see another couple with twins and say things like… ” I can’t even imagine how difficult that would be.”

How would we manage with 4 newborns?

After 28 weeks of waiting (and ultrasounds almost every week), I started having contractions. The day has finally come, 12 weeks earlier than expected, but they’re coming whether we are ready or not.

I came home from work on September 3rd 2021 and felt some major pain in my abdomen. At first I thought nothing of it, but after the third one in 10 minutes, I knew something was off. I immediately went to the hospital.

After arriving at the hospital, I was admitted into a room and hooked up to monitors. The nurses were monitoring me for an hour when they informed me that they weren’t able to stop the contractions… and these babies are coming out today!

I was in disbelief. This wasn’t what we had planned! It’s way too early. This can’t be happening!

My husband took our daughter to a nearby friend’s house and made it back to the hospital just in time. The nurses covered him in hospital garments and off we went to the operating room. It all happened so fast, I really didn’t even have time to worry.

After about 15 minutes of prep work, Justin was able to come into the room. 3 minutes later, they had all 4 babies out. The quadruplets were officially welcomed into the world!

Calloway (male), Eliza (female), Iris (female) and Wilder (male). This is the moment we all had been waiting for, but I didn’t know if I would be ready.

They were so tiny and fragile. The smallest was just over 2 pounds. So many emotions rushed through my head at that moment. There’s nothing like seeing your children for the first time. It really is an incredible feeling!

We were all happy to finally meet Calloway, Eliza, Iris and Wilder.

In the days and weeks to come we would make the 45 minute drive from our home in Marietta to Northside Hospital on a daily basis. It was a rollercoaster of emotions while seeing our babies fighting for their lives in the NICU. But they were strong, and we knew they would pull through.

After 2 long months of them being in the NICU, we got the call that they were ready and strong enough to finally make the journey home with us.  We had to go in and do the discharge process… And yes, it was a separate  discharge process for each baby. It took awhile to say the least.

Honestly, it was all a bit overwhelming for me. I didn’t realize the amount of formula and diapers we would need, let alone adding in a bigger car and eventually house. On top of all that, It was suggested that we hire a night nurse to help us. The thought of hiring someone to help with childcare at night was also scary and very expensive. I could already see all those dollars stacking up quickly- thankfully my sister-in law Jamie set up GoFund Me so we didn’t go broke immediately!

We have some crazy times ahead of us. But, with alot of coffee and prayer, we are going to have some amazing times together.

And that is the beginning of our beautiful adventure… 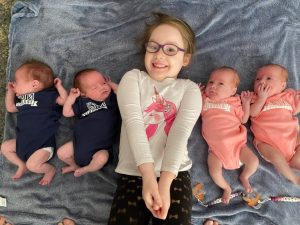 How To Style Your Home With Flowers?